A ten-year-old boy. A small box of his most prized possessions. And 83 years later — a very special legacy shared.

Born June 10, 1925, Roy Thran was the last of five surviving children of Dick and Marie Thran. (You may remember our story a few weeks ago about the beautiful Thran House.) Roy’s mother, Marie was 48 years old when he was born, and had already lost three other intervening children. So Roy’s arrival must have been a time of great rejoicing. He was christened in the Lutheran Church on Sunday, June 21, 1925.

Roy did his lessons on a slate at the Minden School. He caught butterflies, played with metal trucks, dabbled with paints, and enjoyed games of marbles and Tiddledy Winks with friends. Someone (perhaps his father) carved him his very own wooden baseball bat. No doubt he had chores to do at the family’s dairy ranch on Dressler Lane. And even as a ten-year-old, he kept a stained and much-battered stuffed toy he’d carried in his toddler days.

Smitten with the great aviators of the day, Roy joined the Jimmy Allen Flying Club for kids, receiving an official acceptance letter, a silver pilot’s bracelet, and a bronze pin with “flying cadet” wings. Roy even owned his own pint-sized version of the aviator cap worn by Charles Lindbergh on his history-making solo across the Atlantic in 1927.

Roy celebrated his tenth birthday that summer of 1935. His beloved Tante Behrman, his mother’s sister, wished him “more fun than a circus” in a cheerful birthday card. But according to a story handed down through the family, Roy’s mother, Marie, had an awful premonition. As she glanced at Roy one day, chilling words formed across his forehead: “I won’t be here long.” And not long after the vision, Roy’s family was attending his funeral at the same Lutheran Church where he’d been christened.

On August 6, Roy had gone to visit a childhood chum. They took a leisurely ride on a horse, and grabbed a late lunch, and decided to take a dip in the West Fork in the late afternoon. They rode out to a spot at a dam near the Schwake Ranch. The water was deep, and neither boy could swim. Roy stepped off the bank into the cool water — and disappeared.

Roy’s young friend rode quickly for help. But by the time Roy’s body was recovered, it was too late. Two doctors tried in vain for several hours to revive him.

Imagine Marie’s grief: her premonition had come true. Carefully, she packed away all of Roy’s treasures: his aviator cap, his school books, his slingshot, his birthday card. A butterfly pressed in the leaves of a book. It all was gently tucked in a special box, handed down through the family for the last 83 years.

And now, with the family’s permission, Roy’s treasures will be shared with the community in a very special exhibit at the Carson Valley Museum. Two glass cases will display the loves of a ten-year-old boy growing up in 1935, preserved just as he left them. It’s an amazing snapshot in time.

“So many people were touched with sadness back then, and now this journey will come full-circle,” notes Krista Jenkins, a Thran descendant. “The sadness will be different now. Memories have softened with the passing of time, and it’s nice to know that this journey of the ‘Boy In A Box’ will now be told again to a different generation.” 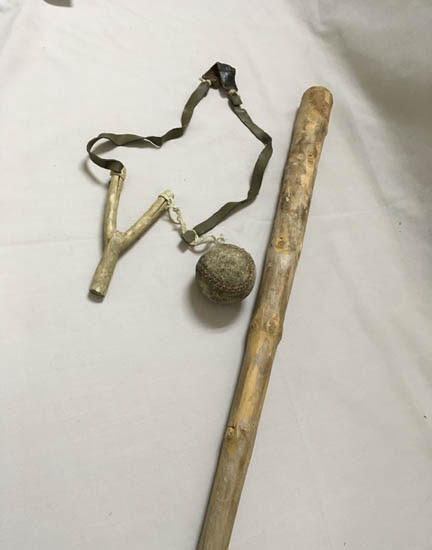 ——————–
Come View Roy’s Special Legacy:   The Roy Thran exhibit will be on display at Carson Valley Historical Society & Museum through the end of 2019, in the “Women’s History” room, located on the second floor. We hope you’ll stop by to see Roy’s legacy!