The sign on the outside used to read “Perry’s Dry Goods.” And locals today still smile when they remember Frank Perry, a short, wiry Basque known for his charming mustache and his wide range of Western wear.

But Perry, as it turns out, wasn’t actually his real name. At birth it was Yparraguirre. “Perry” was just shorter. And much easier to spell. 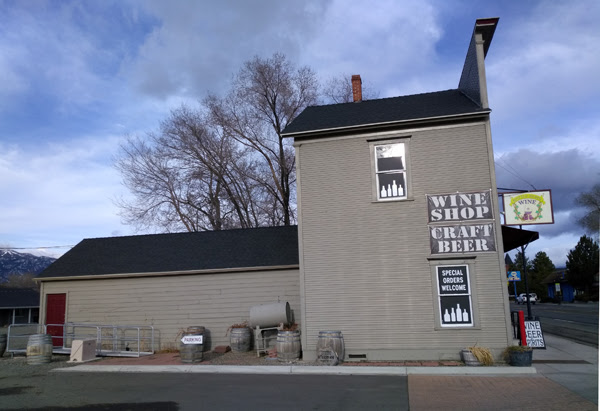 Even today, the tall, narrow building that once housed Perry’s Dry Goods (1448 Highway 395) still draws your eye.  That high, false wooden front stretches an imposing two stories in the air — yet from the side it’s so narrow it seems half the building went missing.

In the rear, that towering front slumps down to merge with a squat, unassuming cottage. (Looks like nothing important back there, right? Spoiler alert: Its history may be even cooler than the front!) 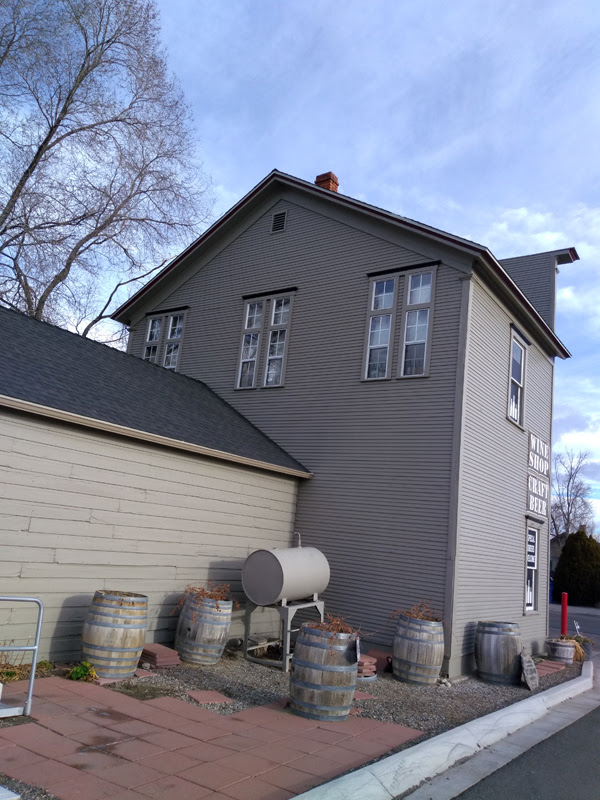 The history of this quirky edifice — arguably Gardnerville’s coolest building — is also the story of Frank Yparraguirre (aka Perry), of course. And before him, Ole Haugner, the shopkeeper who occupied it in earlier days. Together, these two early residents peddled wares within these walls — day after day, year after year — for nearly a century.

So, read on for Frank Yparraguirre’s story. Part 2 will go back even further in time to share Haugner’s own tale. Along the way you’ll discover how this “coolest” building got its strange shape. And we’ll share two secrets about this quirky structure that almost nobody knows today!

Here’s the Backstory on Frank Perry:
Frank’s father (Francisco Yparraguirre) emigrated from Echalar, Spain at the tender age of 13, in 1876. He made his way to San Francisco, where an older brother already owned a hotel at the corner of Powell and Broadway (naturally enough, named the Yparraguirre Hotel).

Like so many young Basques, Frank Sr. found employment as a sheepherder. The succeeding years took him all over California and Nevada, from Six-Mile Canyon near Elko to Monitor Pass, California, tending sheep. Eventually about 1886, Frank and his brothers pooled their resources and purchased a section of land in the Sweetwaters. There, Frank served as proprietor of a 32-room hotel serving travelers on the road to Bodie and Aurora.

Finally secure enough to think about a family, Frank Sr. got married about 1901. And in 1903, Frank Jr. (yes, our Gardnerville “Perry”) was born at the family hotel in San Francisco.

In his early years, Frank Jr. grew up on his family’s ranch in the Sweetwaters, finally starting school in San Francisco belatedly at the age of ten. He proved to be a good student, however. He caught on quickly and graduated with his age-mates in 1921. For a time, he returned to work on the family ranch. But a pair of ranching accidents left him with a broken ankle and two broken clavicles. A recession and downturn in the sheep business also made the young man think, “Well, maybe I don’t belong on a ranch.”

Frank Jr. moved to Gardnerville about 1924. His first job was for Standard Oil Co.; then he did a seven-year stint with the Minden Merc. But finally, in August, 1939, he determined to leap into business for himself. He opened a small dry goods store in a rented building just south of the Corner Saloon (today’s Sharkey’s) — and “Perry’s” was born.

Here Fate stepped in to shuffle up the deck of Life. Ole Haugner, long-time proprietor of a shoe store just up the street, had just lost his wife in May, 1939. And that following March, 1940, Ole too gave up the ghost and, at the age of 85, followed his wife into the Great Beyond.

After more than forty years of service for Haugner’s shoe business, the tall, two-story building just up the street offered a perfect spot for the new Perry’s dry goods store. The location was well-known. And there’d be far more room for inventory.

Frank Yparraguirre cut a deal with the Haugner heirs, eventually purchasing the building in 1949. And that tall, two-story former shoe store location became what locals would know as Perry’s Dry Goods for some 49 years. 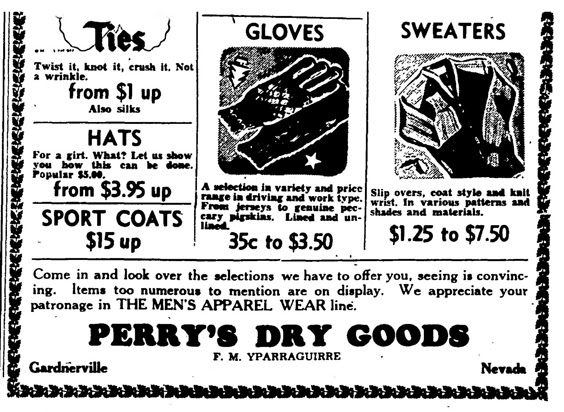 “Be “Be Practical! Give a Practical Gift!” was the caption for this Christmas ad for Perry’s Dry Goods in 1941, not long after he opened. (Record-Courier, December 12, 1941).

Cool as it was on the outside, Perry’s new dry goods building came with an even cooler history. There was the story of Ole Haugner himself, the enterprising Norwegian emigrant who arrived in Gardnerville in 1897 and spent more than 40 years making shoes right here.

And that unimpressive single-story cottage in the back? Well, here’s the first little-known “secret”:  it reportedly was once the home of John Gardner (after whom the town of Gardnerville was named), and had been moved from the original Gardner Ranch to this location!

There’s way more to the story — but we’ll stop here for now. Stay tuned next time for more of the story of Haugner, Perry, and Gardnerville’s Coolest Building!