Did stage robberies still occur as late as 1893? Just ask poor Mike Tovey; he died in one.

The headstone of Mike Tovey stands its silent vigil in the Jackson City Cemetery. It was erected by his employer, Wells Fargo & Co., which evidently felt a bit guilty about Tovey’s death.

Our story begins back in 1880, when Tovey had been hired to guard the Bodie and Carson Stage. That stage, it seems, was in dire need of guarding, having risen high on the “frequent flyer” list for stage robbers. The coach was first robbed on June 4, 1880. Three months later, it was robbed again. Eventually the line accrued what may be a world’s record: six separate stages robbed in under four months, and perhaps as many as 20 robberies throughout the region! The whole robbery thing became, as one news article put it, “monotonous.”

Victims reported two robbers worked the hold-ups in tandem. One robber, it was reported, was a true gentleman… well-dressed and unfailingly polite to the unfortunates riding the stage. The other robber — well, not so much. Victims described his voice as gruff and his manner as frightening.

Wells Fargo assigned one of its best guards to the job: Mike Tovey. Tovey came well-equipped for stage protection. A giant of a man, he stood over six feet tall, was described simply as big, and had a reputation for being fearless.

Sure enough, on September 5, 1880, while Tovey was on stage-protection duty, two men stepped out to hold up the Bodie and Carson Stage yet again, this time about seven miles from Aurora. Tobey managed to shoot one of the would-be robbers, taking a return bullet in the arm himself.

As Tovey was being whisked off to a nearby farmhouse to have his bullet wound attended to, a second Wells Fargo guard scoured the nearby sagebrush for traces of the remaining bandit. But even as pursuers were beating the bushes to look for him, “the robber doubled on his tracks, returned to the stage, and carried off the treasure box” — with its $700 inside. Talk about a cool customer! 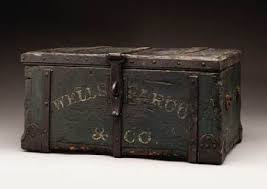 Wells Fargo, of course, was now more eager than ever to track down the villain — not to mention recover the money. Trained investigators were put on the task. These helpfully observed that the dead robber (the one Tovey had shot) had been wearing a peculiar “mask made of red morocco leather.” A clue worthy of a Sherlock Holmes himself!

Unfortunately, the dead robber’s body got buried before investigators ever thought to check the dead man’s pockets… but when they did think of it, they belatedly had the body exhumed again. Sure enough, there in the dead robber’s pockets was important evidence: a bank passbook noting the man’s name, a recent deposit of $1,000, and an address at a Minna Street rooming house in San Francisco.

The dead robber could now be officially identified as W.C. “Bill” Jones, aka Frank Dow. A felon who’d already served time at San Quentin, Jones (Dow) had been known for his heavy drinking, large beard, and  scary-sounding voice.

Aided by the helpful address, Wells Fargo’s investigator now had no difficulty tracking the dead man to his room in San Francisco. Detectives descended on the boarding house and the room was searched (apparently without bothering with the nicety of a search warrant). Lo and behold, a gold watch, ring, and other jewelry taken during the June stage robbery were found. Adding to the evidence: swatches of morocco leather turned up, similar to the dead robber’s mask.

Jones’ fellow robber — the one who coolly made off with the cash box — was arrested at the same boarding house when he showed up a few hours later to “recover his valise.” Or at least, the authorities assumed it was the second robber. As soon as the valise-owner entered the house he was taken to the floor by deputies, a pair of pistols leveled at his head, and his belongings searched.

His name, he told them, was Milton Anthony Sharp. Newspaper accounts made Sharp sound as if he had just stepped out of a novel:  he was “remarkably fine-looking,” with “jet-black hair, swarthy complexion,” a goatee and black mustache, not to mention “eyes that shine so brightly that it is impossible to distinguish their color.” A few lady readers may have swooned.

Sharp had the bad luck when arrested to be carrying an astronomical $2,400 in cash, along with other valuables. Naturally, he claimed he had come by it all honestly while working as a miner. But like his roommate, the dead robber, Sharp also had made a bank deposit on the very same day in the very same bank, and listed Minna Street as his address.

Sharp was hauled off for trial at Aurora, where he was convicted of five counts of robbery, and sent to cool his heels in State Prison for twenty years. There the gentleman bandit was described by his fellow prisoners as the “chief aristocrat in their midst,” or at least so the Pioche Record proclaimed in December, 1880.

But Sharp had a few tricks up his sleeve: he managed to escape incarceration not once but twice! While awaiting trial he tunneled his way out of the Aurora jail, taking off with a 15-pound ball-and-chain still attached, later found smashed against a rock. Sharp was quickly recaptured and sent off to state prison, but nine years later, managed to escape there, too.

Four years after his second escape, Sharp was still running from the law when someone shot Wells Fargo guard Mike Tovey for a second time, as he guarded the stage headed for Jackson. This time, the wound to Tovey proved instantly fatal. 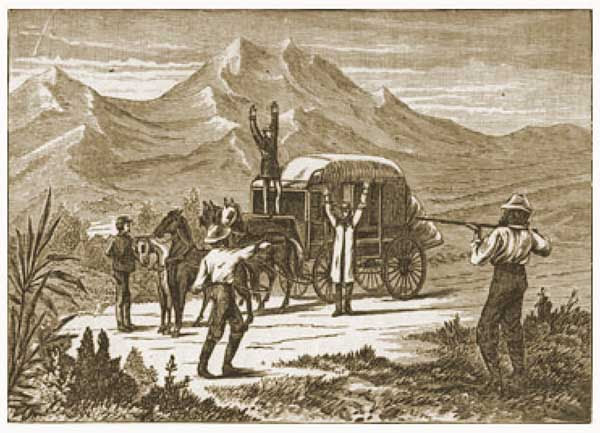 Was the murderer Sharp? Tune in for the rest of the story in Part 2!