The pillars on County Road at the entrance to the Town of Minden once proudly bore a date of 1905. Perhaps it was wishful thinking; plans for this fresh town actually weren’t approved by County commissioners until 1906. And once it was a go, new homes began to spring up immediately in the fresh town.

Minden was the brainchild of Henry Fred Dangberg, Jr., oldest son of H.F. Dangberg. After the death of H.F. Dangberg Sr. in 1904, Fred began to dream of creating a well-ordered, planned community — to be dubbed Minden, in honor of a town near his father’s birthplace in Germany.

That means, of course, that many of the beautiful old homes and commercial establishments in Minden are now more than a century old.

Luckily for historians and visitors, the Town of Minden has published a fabulous walking tour of its oldest buildings, featuring many of the gracious homes surrounding the town’s iconic square. Just click

here to pull up  their walking tour flyer. Scroll to the end for a handy map, which includes helpful thumbnail photos to help you identify the buildings.

map contains information about some of Minden’s most fascinating and beautiful old homes, including these landmarks:

Built by Davies Brothers Construction in 1910 for Clarence Oliver Dangberg, this house is made of thermally-efficient cement block, an innovative building material for the day.

At the time this home was built, Clarence had sold his share of the family ranch to his brothers, and was about to turn his attention to his next creation, the C.O.D. Garage (just down the block, at 1593 Esmeralda), built in 1911. Clarence later became a founding charter member of the Minden Rotary Club in 1926. He died in 1938 and is buried at Lone Mountain cemetery.

Another fascinating house on the walking tour map is the John Dangberg home. This beautiful two-story home was designed by noted Nevada architect F.J. DeLongchamps for H.F. Dangberg, Jr.’s younger brother, John. It was completed in 1912.

This humble frame home with the twin-peaked roof was built by blacksmith John Schrengohst in 1918. John was born in Kansas in 1860.

John and his son, Bill, were blacksmiths in Minden — an important trade in the days when horse-drawn buggies, wagons and farm tools were still in use. The Schrengohsts ran a family blacksmith shop across the street from this house for the next two decades. John died in 1938 at the age of 78, and is buried at Mottsville. 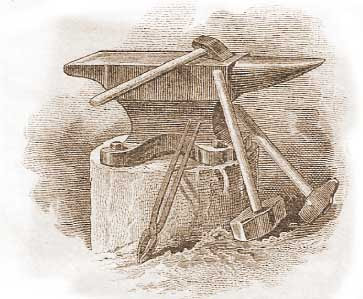 If you choose to make the tour in person, be sure to look for helpful brass plaques mounted at many homes and businesses in Minden’s historic downtown. We hope you’ll take time for a leisurely tour next time you visit this beautiful town!