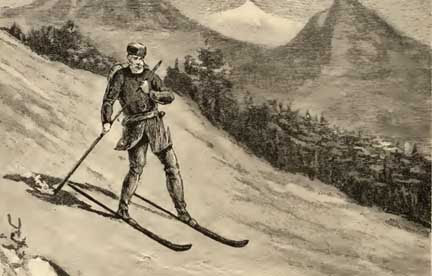 Here’s the fascinating tale about how Snowshoe’s grave got capped with concrete — and who’s sleeping in the long-forgotten grave next to him!

Snowshoe Thompson, you may remember, exited this life on May 15, 1876 at his ranch in Diamond Valley, California. Just 49 years old, this giant of a man was likely felled by an opponent he couldn’t fight: a burst appendix.

It took nine long years before Snowshoe’s widow, Agnes, was able to have a tombstone placed on his grave. But when she finally did, the headstone was a thing of beauty. Carved of white marble, it features a carved pair of miniature skis, crossed in silent mourning.

But though Snowshoe’s grave was now properly marked, it became something of a mess. Agnes died in 1915, and Snowshoe’s only son passed away just two years after his father. With no one left to care for the family plot, the ever-present sagebrush and weeds began taking over.

Until Decoration Day, 1924, that is. (Never heard of Decoration Day? A predecessor of Memorial Day, Decoration Day was started to honor the Civil War dead, and expanded after World War I to include those killed while serving in any war.)

On that fateful 1924 Decoration Day, a thoughtful little girl from Gardnerville decided Snowshoe’s grave deserved a champion. A “self-appointed guardian angel,” she pulled the weeds and laid flowers on Snowshoe’s nearly-forgotten grave that year — and for years to come. Even though Snowshoe hadn’t died in a war, she felt he merited that special remembrance.

Years passed, and eventually other school children took up the cause. Hearing that “persons unknown” had callously attempted to steal Snowshoe’s headstone (unsuccessfully, thank goodness!), children in Genoa began raising funds to anchor his stone firmly in concrete.

And thanks to their efforts, by the end of May, 1948 (now known as Memorial Day), the Thompson family plot had been covered over in two feet of heavy concrete. (They were taking no chances!) Public-spirited Genoans Carl Falcke, Sr., Arnold Juchtzer, and Joe Gossi pitched in to do the heavy labor.

Thompson’s headstone was happily safeguarded from thieves, and his family plot protected from encroaching sagebrush. It’s a great tale of community involvement, and local generosity. Once unkempt, Snowshoe’s grave is now such a point of pride that special signs mark the way for eager pilgrims.

Next time you pay a visit to Snowshoe’s marble marker, take a brief look around for the long-forgotten grave of John Sauquet next door. Today, nobody even knows Sauquet’s name. But back in Snowshoe’s time, he was a “honcho” in tiny Alpine County.

Born in France about 1818, Sauquet was well over forty when he made his way to the mining boomtown of Silver Mountain City. He opened a general merchandise store there about 1865,  selling groceries, provisions, mining supplies — and, of course, wines! (He was, after all, a Frenchman!) Sauquet did so well that between 1865 and 1870 the value of his inventory jumped from $800 to $2,000 — not an easy feat, in a town where mining busts typically followed the short booms.

Sauquet tried his own hand at mining speculation, becoming a trustee (director) of the Mountain Mine. And when mining entrepreneur Lewis Chalmers racked up an unpaid bill approaching $4,000, Sauquet took title to the Imperial Silver Quarries mine as a way to satisfy his judgment.

By February, 1881, however, Sauquet (now in his early 60s) had become ill. He ventured as far as San Francisco to consult a doctor, and in October, 1883, left Silver Mountain behind entirely, moving his merchandise from the now-nearly-abandoned town to the tiny settlement just below at Silver Creek. Sauquet hung on two more years, finally passing away September 27, 1885.

And here’s the fascinating connection to Snowshoe Thompson: Sauquet drew his last breath in Diamond Valley at the home of Agnes (Thompson) Scossa. Snowshoe’s widow and her new husband (John Scossa) took care of Sauquet in his final illness. As a token of his gratitude, Sauquet’s will left everything he owned to John Scossa — assets that included real property in San Francisco as well as in Alpine.

All those old Alpiners knew each other. And Snowshoe Thompson — even though he’s buried in Genoa — was truly an Alpiner, too.

And P.S. — Look closely at Snowshoe’s headstone — the “P” in Thompson is missing! Exactly why remains a mystery. But some say either Agnes or John Scossa may have accidentally given that misspelling to the stone-carver. 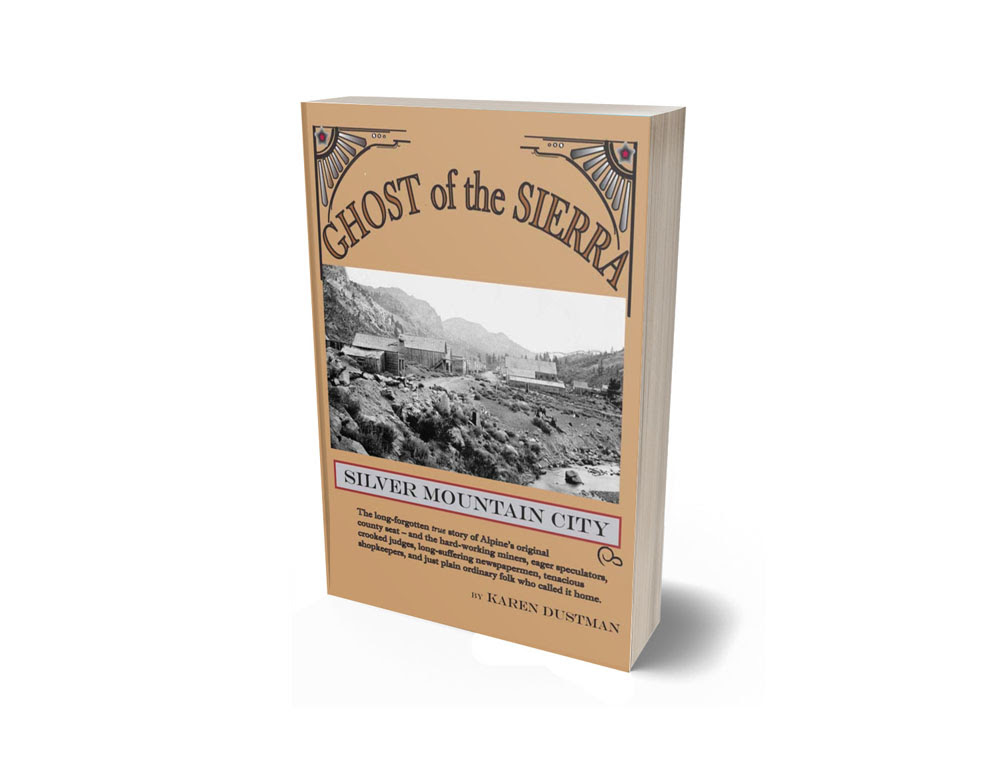 Like to read more of the stories, legends and amazing true tales about Snowshoe Thompson, Silver Mountain City, and Alpine’s wild and crazy silver mines? Jump in and grab a copy– you’re in for a wild ride!